(photo courtesy of the Culture of Peace Foundation)

The Culture of Peace Foundation (Fundación Cultura de Paz), headquartered in Madrid, Spain, and represented by its Founder and President Dr. Federico Mayor, and PANGEA WORLD, represented by Dr. Hana Ayala, ratified a Partnership Agreement at the Foundation’s headquarters on 30 May 2014.

The Foundation was created in 2000, to implement the Declaration and Action Plan for a Culture of Peace engineered by Dr. Mayor and approved by the United Nations General Assembly on 13 September 1999. It builds on the formidable accomplishment of Dr. Mayor as Director General of UNESCO (United Nations Educational, Scientific, and Cultural Organization, 1987-1999).

The Partnership Agreement is the result of interactions and collaborations that Dr. Mayor and Dr. Ayala have engaged in since the early 1990s and that they showcased in their respective presentations at the PANGEA WORLD event hosted by the West Coast Headquarters of the U.S. National Academies of Sciences, Engineering, and Medicine in Irvine, California on 7 February 2014.

As Partners, PANGEA WORLD and the Culture of Peace Foundation aspire to contribute to shape the future by engendering a new kind of international scientific, diplomatic, and economic energy for global sustainability, environmental security, and peace.

In recognition of Dr. Federico Mayor’s visionary effort to enrich the world with a Culture of Peace and in anticipation of this collaboration’s emphasis on charting novel political and diplomatic relationships across geographies, the Partnership Agreement also welcomes and recognizes Dr. Mayor as the Founding Chair of “The Assembly.” PANGEA WORLD is setting up The Assembly to honor preeminent leaders, including heads of state and world-renowned scientists, interested or participating in PANGEA WORLD’s projects. 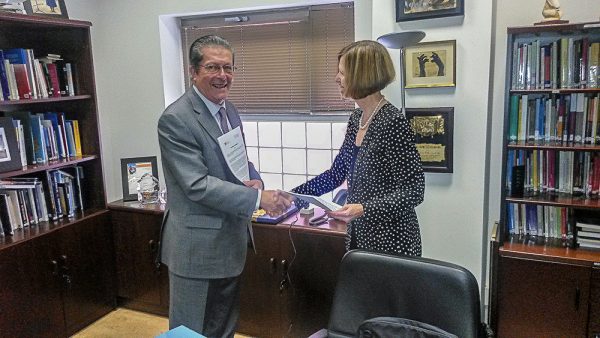 (photo courtesy of the Culture of Peace Foundation)